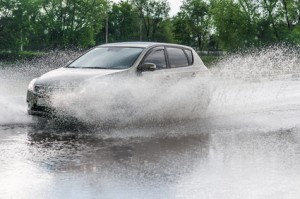 The weather news said, “Flooding in Craighead County – roads covered with water.” It didn’t mean much to me as I traveled through driving rain in Arkansas — until I passed a “welcome to Craighead County” sign. Life is sometimes like that, isn’t it?

Shortly after entering the flood zone I noticed another sign: “Road dangerous when under water.” The rain was coming down in buckets, but the cars were coming from the other side, so I assured myself it was passable.  And, it was only 15 miles – how bad could it be?  At the “8 miles to Jonesboro” marker I felt like I had been driving for hours.  Seeing the water rise out of the boundaries on each side and lap against the road made me harken back to “when under water.”

It was barely light, the cars from the opposite direction were noticeably fewer, and then I saw water creeping across the highway.  I could see the road in between and knew I had enough room to pass through on pavement, so I proceeded, but not without thinking about being the “foolish old lady” who ignored warnings.

God was good — as it got dark and the water came up over the road, I turned on to a US highway and made the last 5 miles on “higher ground.”

To the dismay of my children (grown though they may), who groan when I begin with “life lesson,” I saw some very distinct principles illustrated:

1) When Craighead County says their roads are dangerous under water, don’t ignore it.  There are times when we are given distinct, discernible warnings and we choose to look the other way;

2)  Tunnel vision in achieving a goal can blind us to precarious choices we may make on the way;

3) Stupidity and perseverance are not synonymous; and

4) Always remember! We have a God who knows our weariness, sees the water creeping over our roads, and never leaves us.