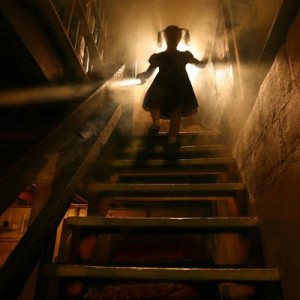 “Will, it is really dark down here.”  “Emma, the longer you are down here the lighter it gets.”

This exchange between two of my grandchildren as we climbed down into the basement struck me.  Isn’t that true of life, as well?

I think of the times when I stepped into the dark places through bad choices and failed to flee.  The longer I stayed, the less the darkness bothered me.  Indeed, as Will said, “it gets lighter.”

A friend’s TV broke and for months he just didn’t watch.  Eventually, he replaced it and began viewing again.  He told me the shock was palpable.  He had become numb to the objectionable material; he had immunized himself against the seduction of the scenarios.  In seven months he had detoxed and now the impact was powerful.

The pull of the darkness is strong.  Web pages measure “stickiness,” meaning how long people stay.  Bad decisions can draw us into a quagmire which envelopes us.  Finding a way back to the light demands intentional action and positive resolve.

As children we sang a little song with the words, “Be careful little eyes what you see….”  The verses continue with ears and hands.  The rest of the chorus says, “For the Father up above is looking down in love.”  We have a heavenly Father who wants us to live in the truth Light.  He makes a way of escape.

Wise leaders constantly monitor their light meters.  Adjusting to the dark is a poor substitute for adequate lighting.  We do our best work in bright environments.