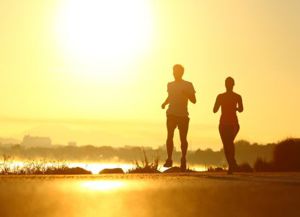 Because my neighborhood was near the Cooper Aerobics Center, and because I walked at 5AM each day, I became part of the route for dozens of runners.

Groups of men would pass. After a few weeks they began recognizing me and exchanging “good mornings.” I was in a very dark place; smiles and greetings didn’t come easily. The first mornings I shyly acknowledged their hello, but continued on my four mile route.

I started looking forward to the quick passes in the road. Gradually, I enthusiastically responded with a strong “GOOD MORNING!” It dawned on me that the return of the greeting 20 times each morning changed my perspective. Returning home to an empty house and an uncertain future was not nearly so frightening.

Then I started watching one group of four men. One man was particularly overweight, but worked so hard to stay up with his friends. After six months the physical change was noticeable and by 9 months he was slim as his fellow runners. I did not know their names and never stopped to speak, but I felt connected to them and exceedingly proud of their progress.

I sent a letter to the Cooper Center thanking them for the impact on my life. I mentioned watching the physical change over the months of the foursome and what it meant to me. I told them their faithful endurance brought me through a dark time.

One morning soon afterwards I walked past them. “Are you the one who sent the letter?” I nodded in assent and we all continued on our routes. “Thanks,” they called back.

A simple courtesy turned into a way of facing challenging days with hope and eagerness.

Are you in a difficult place? Try saying “good morning” a dozen times before dawn! And please don’t forget to greet our great Creator with a bold, out loud “GOOD MORNING, GOD!”