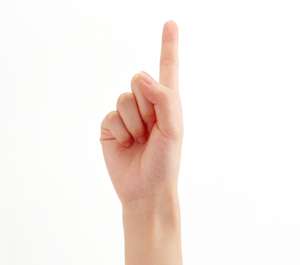 My grandmother was the wife of a Southern Baptist pastor, the mother of five boys, and a great influence on generations in the Smith line. She repeated her life motto to me regularly on our visits:

“I am one and only one, I cannot do everything, but I can do something. What I can do, I ought to do; what I ought to do, by the Grace of God, I will do.” I wrote it out in calligraphy for her to hang in her apartment. After her death, I received it and now it hangs in my house as a reminder of her strength.

Jack Palance as the character “Curly” in the movie City Slickers sagely counseled Billy Crystal’s character and the others to “find the one thing that is most important in life.” He held up a finger, wordlessly emphasizing the one thing.

We are limited. The era of “having it all” is passe. Even neurological science is supporting the one thing by introducing research which shows our brains were not meant for hyperwarp multi-tasking. We have a unilateral configuration which works most effectively when following one task to completion. Sadly, our social patterns long ago trained us to do many things at one time. We reward those who drive themselves into a frenzy being productive. But perhaps this wasn’t God’s design for us.

What is most important to you? What is your one thing? What gets number one priority when allocating resources of time and energy?

I never did ask my grandmother what her “something” was, but I imagine she would have told me bringing up five boys to revere God, understand their responsibilities, and be grateful for their gifts.

Of course, we are called on to operate in a world which demands much from us. But as far as it is possible, let’s join in the covenant to identify our one thing and by the grace of God, do it.