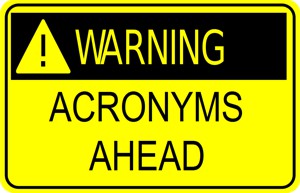 “The Trump children handled themselves well and spoke in complete sentences.”

The commentator’s remark was meant to laud, not taunt. But it struck me as funny. Grown adults who spoke in subjects and predicates hardly seem like news, but today they are.

In 2008, my son Jeff told me about Twitter and the 140 character format. “Oh, Jeff, how in the world can you adequately communicate like that?” One of the signs I was a card-carrying member of “old school.”

Acronyms are not a current phenomenon. Quite the opposite.

Phrases originally designed for military communication now meld into popular usage. For example, MIA (Missing in Action), AWOL (Absent without Leave). To teenagers in the 50s a letter with SWAK written on the back flap, made hearts skip a beat. We thought it was a secret language but SWAK (Sealed with a Kiss) was a well-used war-time code message.

The Weather Channel has a complete lexicon of acronyms. Bad weather is measured in TOR-CON (Tornado Condition Index) or even PDS (Particularly Dangerous Situations). Those are two which could easily blend into common vernacular describing work situations and personal relationships!

Most of the twitter language is lost on me. I still tell people, “That really made me smile” instead of typing LOL! I live in fear of sending a message to my friends and family which translates into something totally vile, so I use up way more characters playing it safe.

When I was promoted to a home office position my parents were quite proud. The day before I moved my Mom and I took one of my older mentors to lunch – a man with great experience and rather jaded about the effectiveness of home office people. He was a successful insurance sales agent. In all seriousness he said to my godly Mom, “Well, what do you think about your daughter’s becoming a HOSOB?” She smiled sweetly and said, “We are so grateful for this opportunity.” Later that night at the country club, my family and I ran into another professional colleague. My Mom beamed and said, “Brenda is going to be a HOSOB. Isn’t that great?” The man looked stunned at this saintly woman speak these words. The only hint I will give you is that HO stands for Home Office. You can fill in the blanks.

Shorthand has its place. But let’s not lose the beauty of a well-constructed complete sentence. Let’s maintain the energy of a conversation which stimulates thought. Let’s keep on talking.