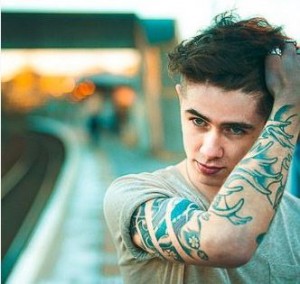 “Why ‘Fortitude’?” I surprised myself as I asked the young man about his arm’s length tattoo.  His response got my immediate attention. “It means courage.  There is a story behind it and it reminds me I will never be a coward again. I will never let fear make me cower.”

The chairs in the coffee shop became pew-like in this sacred space.  The conversation unfolded easily.

“The do-not-fears in the Bible have really helped me this year.  Fighting fear is real to me, as well.  I started studying this because it dawned on me even in the Bible fearful people made really stupid decisions.  I looked at my life and saw the same pattern.  Fear is no friend of clear thought.”

He nodded, picked up his iPad and started searching the do-nots.  His face brightened and the interest increased.  Two strangers engaged in life-strengthening.

We talked for a few more minutes, and as he left he stopped to say, “This was meant to be.”

“Start with Joshua 1:9 – it is the cornerstone; and be fortified.”

A brief exchange with the thumbprint of God all over it.

I have no idea why he fervently inked the reminder on his arm…it doesn’t matter.  His resolve to stand fearlessly marks him more deeply than the tat.

What is your word?  What is your story?  Then whose story are you missing because you don’t ask the question?  Open eyes, minds, and hearts lead us into the most exceptional surprises.