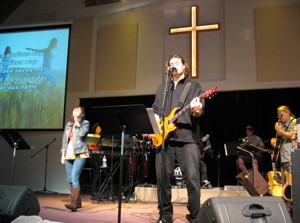 “Christ-Fest: Battle of the Worship Bands”

I turned the corner in the little East Texas town and the sign caught my eye. Then I turned to my grandson Colby and started laughing. “There is just something off-kilter about that, don’t you think?”

Yes, we sing Onward Christian Soldiers and as children we certainly march around singing “We’re in the Lord’s Army.” We put on the spiritual armor and attach posters to the walls of our children’s rooms reminding them that we are part of a much bigger battle between good and evil.

But battling for bragging rights as the victorious worship band? Irony drapes itself all over the idea!

It makes me think of the conflict among those of “The Way” and the way we all too often injure, maim, and disable other believers because they don’t agree on our spiritual practice preferences – or even the way we “do church.” What a shame it is to pit one Christian against another to win what? A trophy of pride. Certainly no trophies of grace are handed out in these intramural contests. We are brothers and sisters in Christ and yet we devour one another way too often.

I know the worship bands will be wailing away praising Jesus and amping up the sound to impress the audience, but is it the right message to send? Will heaven be one eternal, everlasting vying for approval? I think not.

A Catholic bishop spoke recently by invitation on the meaning of the Reformation. He was a gracious (and brave) man to address the topic. He was adept in avoiding theological landmines and instead chose to focus on the importance of unity and the things which bring us together rather than dividing us. A wise man who has probably seen one too many battles in his clerical years.

“They will know you by your love one for another.” Yes, let’s battle and battle strongly with boldness and courage, but let’s make sure our guns are pointed at the true enemy, avoiding friendly fire.