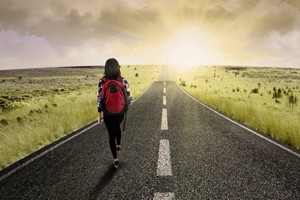 “Son, we are never needing these again.”

My friend and his parents told of their bold adventure from Boston to Southern California forty-five years ago on a bone-chilling winter’s day.

“I took my four year old son into the men’s room before the flight. I told him to hang his snowsuit on a hook. I hung my bulky parka next to it. When we prepared to leave my son prepared to zip into his Michelin tire attire. ‘No, leave it there. I am not taking mine, either. Where we are going we will need these again!’”

And thus began their foray into the future, leaving extended family, career, and the known for the promise of a future in the land of the unknown.

As they reflected on nearly 50 years later, they see God’s leading. Abraham went out in the same way “not knowing where he was going,” the writer of Hebrews tells us. It was a calculated risk because the father saw the brightness of the coastal opportunities, but it was still bold.

Their stories need capturing. Their faith speaks to the hearts of us who want to live expectantly obedient lives.

We are not guaranteed moving out on faith will be without challenges, will we? But we know “the nearness of God is our good.” Think about the possibility you have a snowsuit (of sorts) you can hang on a hook because you will never need it again!