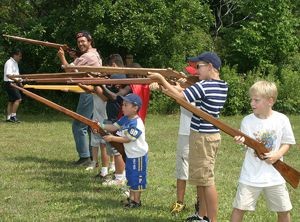 My 14 year old grandson and I are reenactors with Neeley’s Roughnecks, an artillery unit. The battle of Elkhorn Tavern (or Pea Ridge) resulted in the loss of nearly 4,000 lives. Men (and women) fought and died on that rolling farmland in Northwestern Arkansas.

This weekend we shared the experience with hundreds of others. Rarely are the guns overrun. The artillery generally stands strong, firing until the end of the battle. However, this time the infantry fell back, leaving the cannons vulnerable. We fought with our implements but were overcome. We fell to the ground by the guns.

“How long do we have to be dead?” was the question I heard from someone nearby. “Until the battle is over” came back the answer.

Finally, the commanding general shouted, “RESURRECT!” At this point we all rose to our feet, shook hands, and packed up to go back to our urban environments.

I could not avoid thinking about the symbolism and the application to our lives. We are all in a battle, aren’t we? Sometimes we win the skirmishes and sometimes we lose. But the battle goes on.

At some point the general will shout throughout all creation, “RESURRECT!” The dead will rise and those who are still living will join them in the air. What an exciting thought.

Applying this to our daily lives makes us think about relationships we have. Aren’t there some which seem to be dead, but can be revived? Aren’t there friends, children, grandchildren, who seem to be dead in sin but hopefully will hear the voice of the Master calling them to life? What about our hard hearts? We may feel dead, but there is life everlasting which is available to us.

Let’s stay in the battle, but let’s know the call is on the horizon – RESURRECTION DAY IS COMING!