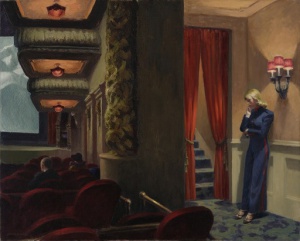 “This painting is a supreme statement on interiority.”

The Edward Hopper work, New York Movie, depicts a woman standing in the stairwell to the theater as the audience is seated watching the film. As in all his work, there is much darkness with a figure popping out as if a spotlight were focused on them. The mood he creates represents the Depression Era in America.

As I first read the commentary I stumbled over the word “interiority.” Then it totally intrigued me. What would be a supreme statement of my own interiority? Not my inferiority, but interiority. What colors would be used to express the inside of me? How about you?

What description of your internal makeup would you want to give to the world? How would it match with the external?
My Dad taught us to look at photographs and study the symmetry (or lack of) in a face. He was convinced when there is discontinuity inside the face reveals the conflict. I know there are exceptions, but it is an interesting exercise. Who we are inside eventually shows up, doesn’t it? The Bible tells us our actions have a direct correlation to the condition of our heart.

I recently asked a friend, “How are you?” She answered, “That is too general a question for all that is going on in my life. Ask something more specific?” I thought and then asked, “Where is your peace?” I was asking about her interiority.

A recent widow at church answered the “how are you?” question with a nod and the normal, “fine.” Then she looked up and said, “Not really fine, but doing as well as possible.” She is on the way to healing because she is in touch with her emotions and is willing to express them.

Hopper captured the drama of interiority. We must avoid putting on a brave face when war is waging inside. And, we must help each other by being trustworthy and true friends. We can work for an inside and outside in sync with one another.