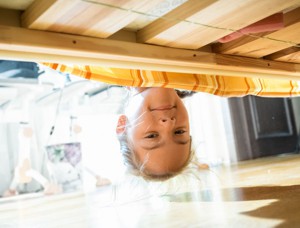 “How much is under your bed?”

In my childhood and teen years I loved to read. I cherished my library card and used it readily.

Only one problem: I had great difficulty returning the books. And when I knew they were overdue, I would hide them under my bed until my Mom demanded they surface and return to their rightful owner – the public library.

This became a metaphor as I grew older. Some people talk about sticking their head in the sand. Not me, I stick it “under the bed.” I put unresolved issues, undone chores, and unattended to duties in a safe, dark place from which they cannot arise and haunt me.

But they eventually do. Like the kind library police who came to the door with a list of books and a demand for their return. In those days they didn’t have those “freebie forgiveness days” when all fines were erased. No, my avoidance technique meant I paid the fines out of babysitting money and puny allowance allotments.

What are the things that are secreted away just because they are either too difficult to handle, too troublesome to manage, or just too overwhelming to attack? Every once in a while I actually face up to them and give them an airing in the light of day. When I do they are usually dealt with in such a short time I wonder (time and time again) why I pushed them away and didn’t just get them done.

In life coaching there is a great term for these items – “tolerations.” We put something on a to-do list, then move it to an even longer one… and so forth until it becomes a perpetual undone. If something is on the to-do list for a day – great. If it is still there after a week it has become a toleration – something we put up with but don’t deal with. They weigh us down as surely as if we were adding layers of weights to our clothing. Tolerations are only removed when they become intolerable.

Let’s climb under the bed and clear out that tattered to do list which grew into moldy tolerations.