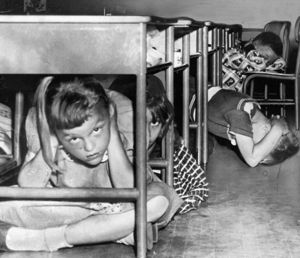 Growing up in the cold war era of the 1950s, I learned the fine art of “ducking and covering.” In case you missed this, let me explain.

The United States established an agency known as Civil Defense to protect us from the effects of an atom bomb attack. School children rehearsed climbing under desks with their hands covering their heads. Children riding bikes were trained to jump quickly into covered areas – and again, ducking and covering. The trigger for these responses was simple: the sight of a giant light explosion in the sky reflecting the explosion of an atom bomb.

Sounds silly, doesn’t it? But ask anyone in their late sixties, or definitely in their seventies. “Duck and cover” was a finely honed skill!

We now know by the time we see a bright flash in the heavens we are already vaporized. Putting a newspaper over your face would be your last earthly action.

Feeling in control is foundational to human nature. Acknowledging the helplessness of forecasting an atomic bomb drop created panic. SO…teaching us all, especially the children to take charge of our destiny made sense to a governmental agency. Don’t you wonder if they chuckled as they handed out yellow hardhats with the prominent CD logo emblazoned on them?

We haven’t changed a great deal. We look at our fears, creating methods to overtake them. We speak affirmations early in the morning to set us on our paths. We establish our own ritual of duck and cover to ward off the effects of potential failures.

Now, as in the 50s, there is only one fail-proof protection – The Lord God Almighty. As the hymnist says, “when morning gilds the skies, my heart awakened cries, ‘may Jesus Christ be praised.’” Yes, we use our wills to devise helpful disciplines, but we know where our ultimate trust lies.