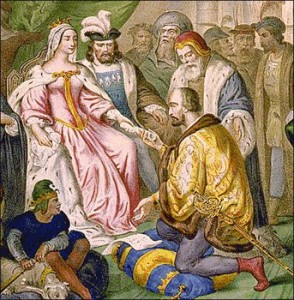 That was my one line in the eighth grade play about new world adventures.  I was Queen Elizabeth 1, costumed in velvet, pearls, and heavy wig.  Try giving great meaning and depth to those seven words, especially when you have NO idea what Hakluyt meant.  I stood in front of the mirror practicing each syllable carefully, striving to look regal and authoritative.

Years later I learned what the Queen was saying.  Basta= enough.  But Hakluyt? Richard Hakluyt was a geographer, chronicler, and explorer.  His efforts to open up the new world, especially the colony of Virginia, were well-known.  He was a talker, writer, talker, journaler, and talker!

His reports were particularly verbose and developed a reputation for their length.  Thus, long-winded speeches were known as “Hakluyts.  Queen Elizabeth was saying to the eager explorer standing before her, “Enough, enough, spare me this tiresomely long report – just get to the bottom line.”  Or, as my Dad would say to me, “Brenda, show me the baby, don’t tell me about the labor pains.”

I don’t know all that information would have helped my prize winning performance, but over the years I appreciate more and more her leadership in saying “Enough, enough!”

“What causes you to say enough?” “Where do you draw the line?” “What are your deal breakers?”

These define moral boundaries.  Strong leaders answer these questions early in their lives.  They lay a foundation upon which they build their careers, family life, and ministry.  Effective leaders form answers before they ever confront volatile or compromising situations.