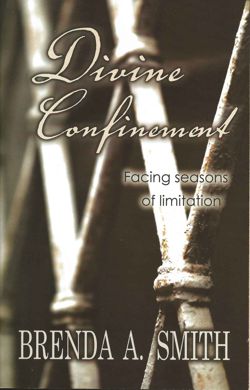 (Note) In 2005 I published a book titled Divine Confinement: Facing Seasons of Limitation. It was written during a seven year season of mine while my parents lived out their last days in my house. A section of the book was devoted to short personal responses. I called them “Musings and Amusings.” For the next few months I will share some of them as the bi-monthly blogs. Brenda A. Smith’s book is available as a Kindle book on Amazon here.

“You must feel confined.”

Just a passing comment, but it scored a direct hit in my soul. Confinement, yes that is exactly what I feel. I am under house arrest. I sit in my office, looking out the window much like Robert Louis Stevenson lay in a childhood bed of sickness, pretending grand and glorious adventures.

Sadly, I often go into an electronic stupor ad overdose on HGTV. But this isn’t a random confinement – this is one appointed by God – this is divine confinement.

I can either continue making chalk marks on the wall denoting time served, or I can see that this is really a learning lab created to mold me into usefulness. Haven’t I been confined before – a marriage gone bad, a broken relationship with a child, a job with no hope of success, an addiction to chocolate and ice cream, a mean and jealous spirit, a wandering heart — weren’t these all confinements?