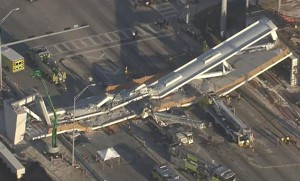 “It was only a crack on the north side, we didn’t think it was serious.”

A pedestrian bridge collapsed in Florida this week killing at least four people. Until the crash it was a media event because of the speed of construction and the cost-effective construction methods. THEN IT HAPPENED.

In the aftermath studies reveal numerous safety complaints and warnings. Substandard construction methods are coming to light. Too little light – too very late.

I thought about people I have known… those who wanted the flashy, rise to the top in a hurry success. They drew much attention and acclaim. But eventually the underpinnings gave way and something crashed, either a relationship, a career, or personal integrity.

There are technological advances which allow progress, but there are also rules of physics which bow to no shortcuts. The same applies for our character. We can find ways to skip a few of the stepping stones, but ultimately it catches up to us.
The cracks start to show. Some close to us recognize the fault lines, but they are either ignored or passed over. We may look on the exterior, but the interior is rotting like a tree that looks good until it falls, letting all see the hollow core.

Pressure often shows us where the weak areas are, just like the bridge. Elevators, bridges, sky platforms – all have weight limits. When exceeded the structure can crater. We are like that, too. Stresses challenge us and if not corrected, bring us down.

I am sad about those who lost their lives in this tragic accident. I am sad, also, for those marriages, businesses, churches, and communities who are impacted by the implosion of leaders.

Cracks are serious – they signal lack of structural integrity. Cracks in our character should be taken seriously, too. Getting to the top too quickly without building the necessary infrastructure is an open invitation to collapse and catastrophe.